Posted on November 20, 2010 by An Earthen Vessel--Terri Apgar

I laugh instead of cry.

That’s what I choose on the day my father does not remember who I am. 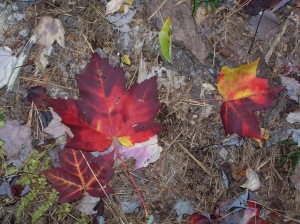 He sits in my living room and spends an hour looking at pictures trying to materialize the 60-odd years that have vanished from his memory today, 49 of which are mine. There are hazy dots that remain tenuously connected in his mind-his mother, his father, the ever-emphasized multiple colleges he attended, a single sibling relationship that faulty memory taints sour.  And always, his wife, my mother.  He asks who I am. I tell him and he says “No” and shakes his head. He names and remembers my husband, quite clearly, so I laugh inside that I have been displaced by the person that is most mine and is so like him in many ways.  He looks at the faces in the wedding photos and says, “When did all this happen?” I have the same question myself some days. How does one explain 24 years of life-building in a simple sentence? He looks long at the family faces in the photos, then finally…not quite remembers, but senses a familiarity. He doesn’t know who they are, but “I don’t have a bad feeling about them,” he says, as if reassuring me.   At that I smile inside, and chuckle a little. It’s good that he likes us, because he has to stay here another hour before the wife he remembers comes and brings him home. When she comes, he’ll show her the book of photos, he says, and see if she remembers and agrees that they’re family. So I play the violin for him between the stirring of potatoes and watch him struggle to put the pieces together, to fill in the gaps that in this one moment, he remembers he has.

When my mother returns, he greets her in the kitchen. With delighted disbelief, he exclaims his newly discovered revelation: “This house is full of relatives!” So we end our time together, him smiling with, if not retrieved memory, a sense of well-being that comes from spending time with people he “has good feelings about.” And me laughing, because I choose to.

About An Earthen Vessel--Terri Apgar

Wife of one, mother of three, so grateful for God's grace--that's me. I'm just tucked into my bay window, opening my heart to God and trying to be brave about letting Him use all that He has crafted inside me to His glory.
View all posts by An Earthen Vessel--Terri Apgar →
This entry was posted in Family, Uncategorized. Bookmark the permalink.

1 Response to Choosing to Laugh